Born on May 20, 1900 in Cento, Mario Maccaferri entered as an apprentice at the age of 11 in the workshop of the famous luthier Luigi Mozzani and studied music at the Academy of Siena.
In 1923, he opened his own lutherie workshop, guitars, mandolins, violins, in Cento and began an international career as a concert guitarist. He is said to be as brilliant as his friend Andrés Segovia. The tours will make him visit all of Europe. 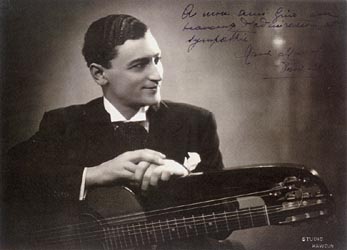 Young Maccaferri in the early 1930s.

Maccaferri applies to the guitar some of the principles of the luthiers of Cremona who brought the violin to near technical perfection in the 17th century.

In 1929 he signed a contract with the manufacturer of wind instruments Henri Selmer, from Paris, to organize and supervise a lutherie workshop, but an accident changed his life, a fall which handicapped his right hand, and he ceased his activity. as a classical concert player to devote himself to making his concert guitars.

In 1939, he embarked for New York. There he founded his new reed production company: the French American Reeds Co., which is still in operation today. 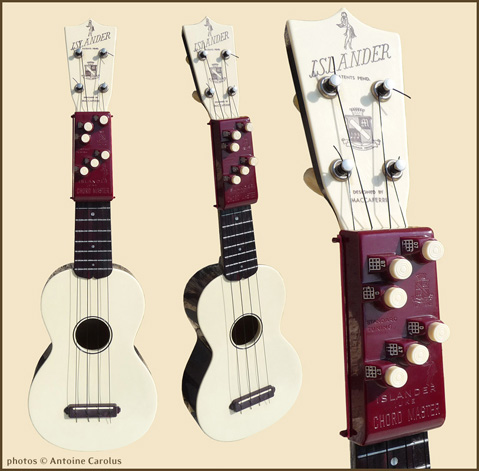 Maccaferri’s Ukulele and His “Chord Master”

In 1932 Mario Maccaferri took out the patents for a concert guitar, with innovations; an interior resonator to give the guitar an equal sound balance between all the strings. Not just power, but sound that won’t be drowned out in an orchestral ensemble. A little like the triangle, whose sound power is very modest, but thanks to its particular frequency, it is heard in an orchestra, in the middle of brass and strings.

For appearance, it is the cutaway which allows easy access and an extension of the fingerboard above the rosette to go higher in the treble. There is also a fold on the top, as on mandolins, at the level of the bridge, a zero fret which acts as a nut and beginning of the vibrating string and a second nut only serving as a guide. To ensure the intonation is as accurate as possible, the bridge is slightly helicoidal, to compensate for the difference in the diameter of the strings. It is also a thinner head, so that the strings remain in the most straight alignment possible. And precise tuners, under the hood, for finer tuning.

For a series guitar, the manufacturing is neat with split and unsawn wood, so as not to cut the fibers (in the tradition of the luthiers of Cremona, Guarnerius and Stradivarius) and interior bracing adapted to the sound characteristics sought, it is also the development thanks to Selmer’s metal workshop of very elaborate mechanics, under cover to guarantee reliability and precision. All the parts including the tailpiece, come from Selmer, the manufacturing is controlled in all its elements.